It is twelve o’clock. Midnight. The city is drowned in a tense calm. The air smells like the soil after a rainy evening. A dark sky with no stars which seems to be announcing a closing storm. A few rambler cats are taking shelter beneath balconies, porchs and, the unfortunate ones, beneath the benches of the squares. Sometimes, a golden flash electrify the sky, tearing it from the top to the bottom. The men and women brave enough to defy the storm are like bad photos when our leading lady stares at them. They look like demons whose eyes, at least that is her thought, are rubies as red as blood. There are tall and short buildings, new and old ones, from this century and the previous one; all of them parade in a disordered procession of domino’s chips. Our beautiful young lady, around twenty years old, is observing this nocturnal show through the window of the bus. Her expression is indifferent, bored. She belongs to that world. She belongs to that mysterious city. There is nothing in there that can really surprise her.

The bus turn to the left, managing to get into a narrow street perfectly illuminated for several rows of classic streetlamps. They look like oil lamps pulled of an old movie. The streetlamps paint the street with their orange lights. Underneath them there are strange forms, ghosts from the city. They are attracted for the lights but afraid to be discovered They vanish quickly, just a second later, returning to their world, far away from human curiosity. They are entities that belong to the darkness, with no form, name or voice. Forgotten spirits.

The bus continues its way, slowly, trying to avoid the potholes of the road. Curtains are flying in a half open window, defying the semidarkness, the blackness. A drizzle of transparent pearls interrupts the scene, bothering to our leading lady, who draws herself up and sharpen her sight: in less than a minute, the drizzle has become in a downpour. The windows are full of rain’s drops; our leading lady cannot see anything through the glass.

Someone clears his throat behind her. The young lady turns her head, interested. If she is not able to observe the city anymore, at least She will enjoy her journey studying the rest of the passengers. Two seats behind her, there is an old man who wears a khaki military uniform. He is bold like an apple, however, in contrast with his own incapacity to keep the hair on the top of his head, he has got a long beard, pale like the sunrise’s fog. The beard almost reaches the man’s waist. Besides, how if It was a personal signature, the guy has got a peace symbol sewn in the jacket’s lapel. He is singing in a low voice a Beach Boys’ song. Love you, concretely. Our leading lady knows the song because her grandfather was a big fan of the american band. Such a choice for a rainy night, she told herself.

After that, She looks at the end of the bus. In the last seat, our leading lady finds another man: a mannequin created for the modern capitalism society. Black suit, perfect haircut, a leather suitcase. A banker, a lawyer or, maybe, an insurance salesman. She has known some of them along the years. People who could sell their own mothers for a few coins. The boat trip is not included, young lady.

On her left, there is a fat woman. She wears a elegant sky blue dress. Yes, sky blue; because there are people who can make differences between blue and sky blue. People who can recognize a lot of different kinds of blue. Also with red or yellow, of course. Anyway, our young girl is not one of them. Our beautiful leading lady is only able to recognize the rainbow’s colors.

The fat woman supports a glass small bottle into her hands. It seems to be a common bottle which you can find in any supermarket. She probably pulled of the labels and that is it. She is staring at the bottle. inside it, a curious butterfly is flapping its wings. Its body and its wings are ridgy with orange and black stripes. However, the most showy thing of the butterfly is the drawing of a skull situated just behind of its head. The fat woman is whispering some words, but our leading lady is unable to hear them.

Outside, the city is a blurred photo. A watercolor picture drawn for the best Van Gogh. Our young lady can only distinguish strange forms. Everything is confused. The clarity is gone. Buildings, men, women… All is gone, erased for the rain. She could say that the city has disappeared in front of her eyes. Afraid of her own thoughts, our leading lady seeks for the last of the passengers. It is another man. Mature, distinguished. He wears a vest, a bow tie and a monocle. A librarian, perhaps a count. How can you make a difference between a count and a duke? Our beautiful young lady has wondered herself that question many times and She has no found a convincing answer. A black cat is slept in his lap. It has got a thick and brilliant fur. The man is caressing the cat, absent-minded. Our leading lady tries to read his lips, opened although in silence: «O God, I could be bounded in a nutshell, and count myself a king of infinite space».

That is the sentence that she gets. She does not know where, but our leading lady believes She has heard the same words before. She tries to remember when or where, but She cannot do it. Finally, after a while, She gives up and sits back comfortably, leaning her head against the window. Then, She realizes that the rain has stopped. After that, our young lady cleans the glass and let her eyes go outside, where there is a black open mouth which goes into the darkness. It is tunnel. A tunnel that She has never crossed and, if you would ask her, She would swear that It was not there yesterday. Seconds later, the bus reach the blackness.

The last thing that our leading lady sees is a blinding light. Afterwards, the nothingness, the forgetfulness. 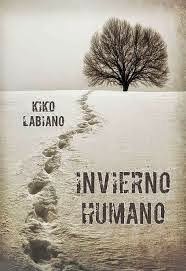 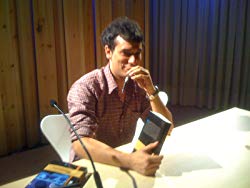